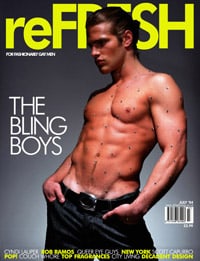 I know from the search engines that there are plenty of Joseph Sayers fans visiting, mostly due to a posting several months back on some photos that turned up of the diminutive lad in the buff, so this, brought to my attention by a reader, should interest a few people. It doesn’t look like the surfaced photos had any effect on his attraction to the gay spotlight (in England at least) as he strikes a Beckham-esque pose on July’s UK mag reFRESH. Large version.