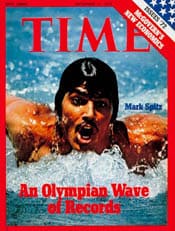 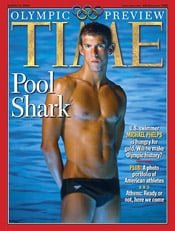 Mark Spitz and Michael Phelps: two male Olympic swimmers, two fine athletic specimens. It’s interesting to see the effect 32 years can have in the selling of magazines…and athletes. Even if the 1972 Time editors had chosen to showcase Spitz’ rippling torso, it’s unlikely they would have allowed his Speedo to drift halfway down his ass cheeks — that’s no oversight folks, but who’s complaining?