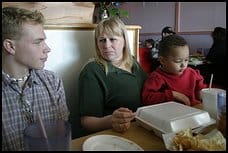 The Washington Post today begins a series on being young and gay in rural America. For the first part of the series they followed 17-year-old Michael Shackelford for hundreds of hours over the past year. Michael’s story is one with which many of us are familiar, the story of self-discovery, of finding first love, yet his is compounded by life in Oklahoma, the Bible belt, and a family whose religious faith is at odds with homosexuality:

“The greater Tulsa phone book has 13 pages of church listings; there are 133 churches alone that begin with the word ‘First.’ One Tulsa church that bills itself as a ‘hardcore, in-your-face ministry’ constructs an elaborate haunted house each Halloween where live actors depict various sins. Last year’s spook house featured a gay male pedophile.”

“‘Being gay, you’ll never have that true love like a man and a woman,’ Michael says, standing against his truck as Merle Haggard mixes with the backyard whippoorwills. ‘Hearing all the songs about a man coming home from work to his wife’s loving arms, you never hear of gay couples like that…Do you?'”