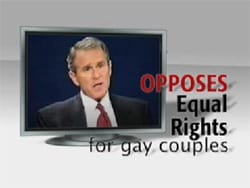 The Human Rights Campaign will broadcast an ad on Bush’s gay rights record during this week’s Inauguration festivities. The ad contrasts Bush’s statements on gay marriage, hate crimes, and gay rights with his actions over the last four years and sends a warning about what the next four could bring. Watch the ad. Meanwhile, CNN takes a more subtle approach with their headline/photo combo suggesting that Bush simply lacks the necessary intelligence.