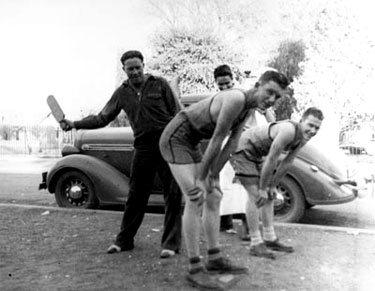 In the NYT Magazine Benoit Denizet-Lewis takes a look at the state of today’s college fraternity, with particular emphasis on its ongoing relationship with alcohol. He also touches briefly on the fraternity’s relationship with gays, which resonates with the writer’s own coming out.

The current Phi Delts at Northwestern don’t have an openly gay member and also like to throw the words ”gay” and ”fag” around a lot (they assumed I was straight), but I’m not convinced the words actually mean much to them. I watched in surprise as two brothers who only hours earlier jokingly labeled Lodge members as ”a bunch of pretty-boy fags from Long Island” ridiculed a freshman who walked out of a room when he saw two guys kissing on television. ”Dude, what are you, homophobic or something?” one brother asked him. ”Grow up, man.”

Additionally, a frat boy confirms what most of us have thought all along:

”The whole rush thing is really pretty gay,” said Matthew Rosenthal, a goofy, curly-haired Phi Delt junior who was nursing a hangover one weekday afternoon in his large room, which is decorated with Frank Zappa and Grateful Dead posters. ”Sometimes it feels like we’re trying to get them to sleep with us, you know?”

And in case you missed it, here’s last week’s Gawker interview with Denizet-Lewis. Towleroad agrees with 2/3 of their editorial staff that the 29-year-old is someone we’d definitely classify as a “hottie.”