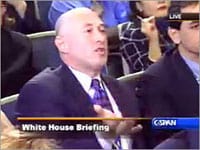 A letter is being circulated by Minority Whip Richard Durbin (D-IL) behind the scenes calling for other senators to join an investigation into former White House reporter Jeff Gannon.

According to Raw Story, the letter “calls on President Bush to ‘order a full inquiry’ into how a ‘fake’ journalist working for a ‘sham’ news organization got access to the president.”

Part of the letter to Bush reads:

“As you know, concerns that government officials may be trying to deceive the public by manipulating the media can be extremely corrosive to public trust. For that reason, we respectfully request that you order an immediate and thorough investigation into the Gannon/Guckert matter. How is it possible that a man using a fake name, with dubious journalism credentials, was able to clear the White House’s extensive security screening process and gain such close access to you and your staff for such an extended period of time?”

Via AmericaBlog, find your Senator’s contact info here. Encourage them to take part in this investigation.