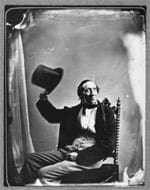 A new biography of Hans Christian Andersen, detailed in this article, says that Andersen was gay but most likely a virgin his entire life. Among the other highlights:

* “At age 14 he moved to Copenhagen in hopes of finding other misfits like himself.”

* “In London, he stayed with Charles Dickens, who found the effeminate, fussy, self-centered and hypochondriacal bachelor a tiresome guest.”

* “The Little Mermaid was written after a crisis Andersen suffered in 1836 at the marriage of Edvard Collin, who may have been the love of Andersen’s life but who refused to play the part of his romantic soulmate.”