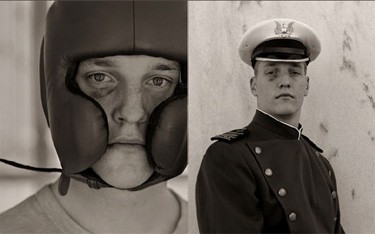 The British photography team of Jonathan Anderson & Edwin Low takes another look into the world of athletes with their upcoming book Athlete-Warrior. This latest project makes the on-location process of photographing gymnasts, swimmers, boxers, and the like from West Point, Annapolis, and Colorado Springs military academies into a scrumptious an intellectual exercise wherein they attempt to reveal “fascinating parallels” that emerge when the same cadet is photographed in both his military and athletic attire.

From the gallery they’ve released I’m not sure if it’s the “fascinating parallels” you’ll be gasping at but the crisp B&Ws will please anyone with a uniform fetish or a love of strict discipline. (thanks Slaters)