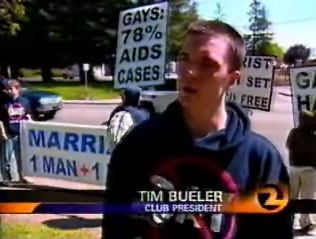 I meant to post this yesterday but didn’t get the chance. It’s video of a protest held in Rohnert Park, California by the group Gay Marriage No and the high school’s Conservative Club. The protest is in response to the upcoming “Day of Silence” in which students take a day long vow of silence to protest discrimination and harassment of LGBT people. Christians have responded by creating their own “Day of Truth”. It’s refreshing to see this kind of exchange, though sad to see such ignorance at such a young age. It also makes me question how effective a “day of silence” can be since it seems such a passive response to an issue that requires dialogue more than anything. Video.