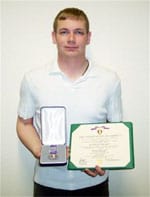 “I know a ton of gay men that would be more than willing to stay in the Army if they could just be open. But if we have to stay here and hide our lives all the time, it’s just not worth it. We can’t keep hiding the fact that there’s gay people in the military and they aren’t causing any harm,” Stout told The Associated Press. “The old armchair thought that gay people destroy unit camaraderie and cohesion is just wrong. They said the same things when they tried to integrate African-Americans and women into the military.”

Stout was injured while operating a machine gun on a Humvee. His scheduled discharge from the Army is May 31. But because he has spoken out now, he risks early discharge and jail time.

More power to him.