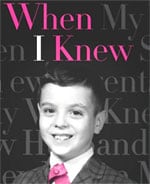 I’m really proud to be part of a new book coming out this week edited by photographer Robert Trachtenberg and illustrated (with gorgeous graphic design and vibrant humor) by Tom Bachtell.

is a joyful, optimistic, often hilarious celebration of that moment when every gay or lesbian kid realizes that he or she is just not the same as the other kids. And the realization of that moment is crystalized and clarified by memory and experience.

Among my favorites are a touching story from editor Steven Orr about a day when his father and brothers were throwing a football in the yard while Orr watched alone from the steps. When his father came over and asked him if he’d like to throw the football too, Orr replied, “I’d really rather go pick flowers.” Rather than berate him for being a sissy, his father did just the opposite, according to Orr: “My father, a former football coach, spent the rest of the afternoon picking flowers with me in a nearby field.” 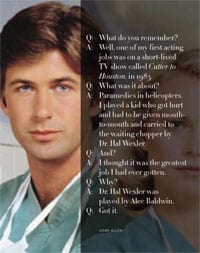 Another tale I enjoyed was offered by entertainment journalist Jess Cagle: “My dad was a big, tall, Texan who co-owned a feedlot. When I was in fourth grade, he told me that about two dozen of the cattle belonged to me. They would be slaughtered and the proceeds would be put into my savings account. I asked if I could give the cattle names, and he said yes, thrilled that his son was suddenly more interested in the feedlot than Bewitched and decorating the house. The next day as we drove to the feedlot, he asked me if I had come up with any names. I told him I had. I was going to name each of the cattle after precious stones.”

When I Knew is full of these autobiographical stories, including some humiliating moments from my own angst-ridden childhood. It’s also peppered with yearbook photos of some of the contributors and sharp, comical illustrations. I think it’s a great book for parents too. I’m sure many parents with a gay son or daughter can relate. I found myself relating to lots and lots of them.

Many times during childhood and adolescence gays feel really, really alone — I know I did. This book, beyond a doubt, proves that’s just not the case, and it’s great that so many have the courage and strength to look back on it and laugh.

Knowledge is Power: “When I Knew” [the advocate]