The Boston Globe this weekend took a look at the various searches underway for the biological origins of homosexuality, the quest for a physiological piece of evidence that would put to rest the notion that homosexuality is a choice.

Neil Swidey’s lengthy article is a crash course on the last 15 years of research on this issue, framed by the touching story of a mother and her two identical twin sons, one of whom is showing signs of gender nonconformity (basically those traits that Focus on the Family recently welded into a warning list for conservative bigots) by displaying more feminine interests than those of his brother. 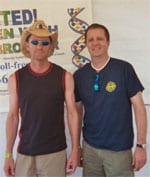 Swidey covers Simon LeVay’s 1991 study that determined the size of the hypothalamus was different in gay and straight men, Dean Hamer’s 1993 finding that gay brothers shared a specific part of the X chromosome at a higher rate than gay men shared with straight brothers, this year’s Swedish study linking the gay and straight response to pheremones, and the Viennese researcher’s study of fruit flies that changed their sexual behavior with one flip of a genetic switch.

The article’s point comes together here: “Taken together, the research suggests that early on in the womb, as the fetus’s brain develops in either the male or female direction, something fundamental to sexual orientation is happening. Nobody’s sure what’s causing it. But here’s where genes may be involved, perhaps by regulating hormone exposure or by dictating the size of that key clump of neurons in the hypothalamus. Before researchers can sort that out, they’ll need to return to the question of whether, in fact, there is a ‘gay gene.'” 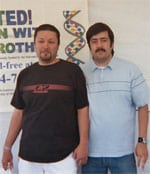 This year there’s a study being conducted by Northwestern psychiatrist Alan Sanders funded to the tune of $2.5 million, an extraordinary amount for a study of this kind, to look at 1000 gay brother pairs. The study will look not only at finding a gay gene, but also gender nonconformity issues and the big brother effect — the phenomenon that gay men are often the youngest in a family of brothers. Because of its large data pool and the amount of money allocated for it, the study is expected to yield some important results.

Swidey treats this topic with care and humanity. At the end of the article we are left with an image of a mother caring for her two twin boys, one of whom is certain to face greater social challenges than the other, because at the moment he is identifying as a girl. Although her son has begun to exhibit more “boyish” behavior at his mother’s suggestion, her ultimate conclusion is the way we wish all mothers would react: “‘I can now imagine him being completely straight, which I couldn’t a year ago,’ she says. ‘I can imagine him being gay, which seems to be statistically most likely.’ She says she’s fine with either outcome, just as long as he’s happy and free from harm.”