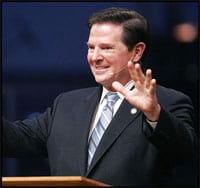 James Dobson, founder of Focus on the Family, told the 2,200 mostly white people in Two Rivers Baptist Church: “It doesn’t matter what we think. The court rules.” The Supreme Court, he said in a video broadcast, has created “an oligarchy. It’s the government by the few.”

Funny, they weren’t talking activist judges when the Court ushered Bush into office.

Doesn’t the Constitution declare equal rights for all America’s citizens? Nobody is asking for special rights here, homosexual or otherwise. Somehow, in the back of their minds, these conservatives know this. They’ve simply been brainwashed by religion into somehow thinking their skewed vision of morality should trump the vision of our founding fathers. Take what DeLay said:

House Majority Leader Tom DeLay (R-Tex.) said “activist courts” are imposing “state-sanctioned same-sex marriage” and “partial-birth abortion” and are “ridding the public square of any mention of our nation’s religious heritage” in what amounts to “judicial supremacy, judicial autocracy.”

In Supreme Court rulings, DeLay said, “rights are invented out of whole cloth. Long-standing traditions are found to be unconstitutional. Moral values that have defined the progress of human civilization for millennia are cast aside in favor of those espoused by a handful of unelected, lifetime-appointed judges.”

Yes, let’s just throw out the most successful system of democratic checks and balances ever created because DeLay’s religious values are more legitimate than everyone else’s.