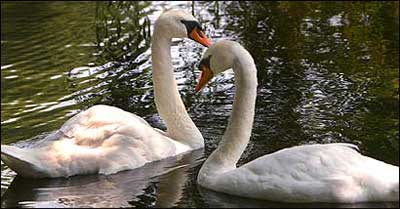 A famous pair of swans in Boston’s Public Garden has been discovered to be a lesbian couple, which seems to have upset Parks spokeswoman Mary Hines. You see, the swans are named Romeo and Juliet, and she thinks letting the secret out will ruin the myth.

”Each year when the swans go in, the kids immediately come to us and say, ‘Which one’s Romeo, and which one’s Juliet?’ It’s just like one of those fairy tales; why spoil it?”

Just come out and say it, Mary. You don’t like queers. I’m so sick and tired of these people. Some of them even want to go out and get guy swans for the females. Um, they already tried that with penguins and it raised a big stink! The swans love each other. They are les-bi-ans!

Why not just take the advice of the wiser-than-her-years 15-year-old Emma Stokien, who said, ”If these two swans are happy together, they shouldn’t have to have a guy. It’s good to have the swans as a symbol of the acceptance in Massachusetts.”

Another piece of evidence that time is on our side.

Thou Art No Romeo [boston globe]
(thanks christopher)