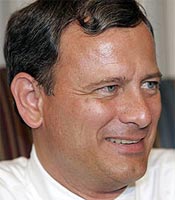 More on Judge Roberts’ involvement in the 1996 gay rights case:

Jean Dubofsky, the lead plaintiff”s lawyer in the 1996 Romer v. Evans gay discrimination case, said she asked John Roberts, an appellate lawyer at the time, to participate in the case because she knew that Roberts was a conservative who could provide an “insider’s road map” to getting the votes to win and he did, advising her that to pick up the middle of the court she would have to do so without overturning a prior sodomy case, Bowers v. Hardwick.

Dubofsky: “So when I was asked by Justice Scalia if they would have to overturn Bowers v. Hardwick to rule my way, I said no. In this particular case if you wanted to get the U.S. Supreme Court turned around on gay rights issues, you didn’t have to win every gay rights case floating around out there.”

Walter A. Smith, in charge of pro bono work at Roberts’ firm, said he was able to recruit Roberts to work on the case because “It looked like a challenging, interesting, provocative, important case. Everybody knew that, and I think he believed it was worth his time.”

So, the question arises, since Roberts has pointed out that lawyers do not always agree with their clients, where does he truly stand on the issue? Smith says “Every good lawyer knows that if there is something in his client’s cause that so personally offends you, morally, religiously, if it so offends you that you think it would undermine your ability to do your duty as a lawyer, then you shouldn’t take it on, and John wouldn’t have. So at a minimum he had no concerns that would rise to that level.”

What this says to me is that if Roberts did have moral objections to the subject matter of the case, his ambitious professional interests trumped them at that time. But where would he stand on the issue today? As the NYT points out, “Judge Roberts has made it a point to note that lawyers do not always agree with their clients.” It’s an unanswered question, and one that I certainly hope will be brought up in the hearings.

The other outstanding question is why did he not disclose the fact that he had worked on this case? Because he was not the chief litigator as Smith has said? Or because he knew that mention of it would possibly rile ultra-conservative factions, as it is now doing, into putting up enough question marks to trouble his nomination?

If anything, Roberts seems by all this evidence to be an extremely sharp strategist with an acute sense of how to get votes on or off the bench.

>>In related news, he also once played Peppermint Patty in an all-male high school production of You’re a Good Man, Charlie Brown, which begs the question — did Roberts characterization of a strong butch woman imply a sympathetic leaning toward lesbians, or was this role taken on simply toward the pursuit of sharpening up his acting skills? Inquiring minds want to know.