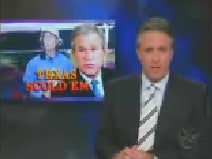 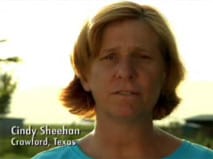 Objection to war is nothing new in this country and neither is the attempt to stomp down protestors by labeling them crazy or, God forbid, unpatriotic. I’m frankly shocked that it has taken this long for a figure like Cindy Sheehan to emerge. Whether or not she’s the most articulate speaker with the most consistent message, she is taking a stand that few of the Democrats in Washington have dared vocalize, even if they agree with it.

Jon Stewart did a hilarious report on how Cindy is ruining Bush’s vacation. Here is Cindy’s TV ad as well, supposedly running on a cable station in Crawford. Hundreds of vigils are planned around the country on Wednesday evening to show solidarity with the first non-celebrity anti-war figure this country has seen since the invasion of Iraq, and her very legitimate form of patriotism.