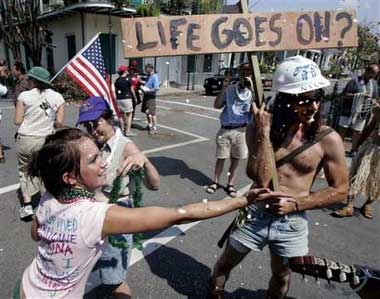 While the annual New Orleans Southern Decadence party was officially cancelled in the wake of Hurricane Katrina’s destruction, over the weekend about two dozen motley marchers took to the streets in an assortment of costumes, beads, and hats “determined to fight back against overwhelming despair” according to the Fort Worth Star Telegram. They stopped at Johnny White’s Sports Bar & Grill, one of the only open bars in the French Quarter.

“The revelers found no ice or air conditioning once they got to the bar, where the cigarette supply had badly dwindled, but a drink of hard liquor was just what some of them needed. ‘Everyone’s drinking. We’re all happy,’ said Andy O’Brien, 23, a bare chested carpentar’s apprentice who has been getting by on canned goods, borrowed food from shuttered bars and help from friends and neighbors.”

But was this kind of celebration far too premature to be in good taste, or was it a necessary stress release for those in the thick of the disaster? Nearby, bloated corpses still floated in the water and submerged homes concealed still unknown horrors. Those were the obvious questions raised by this typical New Orleans display as rescue efforts went on unabated, just blocks away.

If this is what’s being shown as the “gay reaction” to the disaster, as a gay man I’m fairly horrified (though I will say there’s something to be said for a show of spirit among the ruins). It is, however, certainly apparent you don’t see the brutally affected poor black population taking part in this party.

The gay reaction in Houston, however, is an entirely different story.

Barbara Bush to NPR on evacuees: “Almost everyone I’ve talked to says we’re going to move to Houston. What I’m hearing is they all want to stay in Texas. Everyone is so overwhelmed by the hospitality. And so many of the people in the arena here, you know, were underprivileged anyway, so this –this is working very well for them.” Audio.

New York Times on Vanishing Cities: “Changes in climate can make a friendly place less welcoming. Catastrophes like volcanoes or giant earthquakes can kill a city quickly. Political or economic shifts can strand what was once a thriving metropolis in a slow death of irrelevance.”