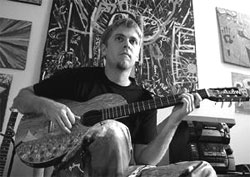 Marble was cuffed and detained briefly by the Secret Service. He’s now selling the video of the interaction on eBay.

Marble: “I am no fan of Mr. Cheney because of several reasons. For those who don’t know, Mr. Cheney is infamous for telling Senator [Pat] Leahy ‘go fu** yourself’ on the Senate floor. Also, I am not happy about the fact that thousands have died due to the slow action of FEMA, not to even mention the wrong war in the wrong place at the wrong time, i.e. Iraq. I had no intention of harming anyone but merely wanted to echo Mr. Cheney’s infamous words back at him. At that moment, I noticed the Secret Service guys with a panic-stricken look on their faces, like they were about to tackle me, so I calmly walked away back to my former house.”

Feds knew they were wrong in banning media: “Rather than fight a lawsuit by CNN, the federal government abandoned its effort Saturday to prevent the media from reporting on the recovery of the dead in New Orleans.”

Tom Delay to evacuees: “Now tell me the truth boys, is this kind of fun?”