Dick Cheney will soon break his silence about the hunting accident in an interview with Fox News. The question is, will the questions be as loaded as Cheney’s gun?

Politicians on both sides of the aisle are troubled at the VP’s silence over the hunting incident that nearly killed (and still may kill) a 78-year-old man. It is causing “strain” in the White House too.

Cheney might have defused the incident quickly with a statement and apology but the fact that both the news about the actual shooting and the news of Whittington’s heart attack were withheld for hours is causing both media and politicians to suspect that something larger is afoot here.

A few reactions from here and there: 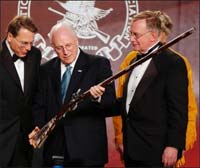 Washington Post: “Vice President Cheney’s slow and unapologetic public response to the accidental shooting of a 78-year-old Texas lawyer is turning the quail-hunting mishap into a political liability for the Bush administration and is prompting senior White House officials to press Cheney to publicly address the issue as early as today, several prominent Republicans said yesterday.”

Hillary Clinton: “A tendency of this administration — from the top all the way to the bottom — is to withhold information … to refuse to be forthcoming about information that is of significance and relevance to the jobs that all of you do, and the interests of the American people. Putting it all together, going back years now, there’s a pattern and it’s a pattern that should be troubling..The refusal of this administration to level with the American people on matters large and small is very disturbing, because it goes counter to the way our constitutional democracy … is supposed to work.”

Details about Cheney’s companions and questions regarding his state of sobriety during the incident are slowly emerging:

Think Progress reports on a passage that was removed from an MSNBC article regarding the drinking activities of Cheney’s hunting party.

Bob Cesca : Was Cheney hiding his Lewinsky? “Sirius radio’s Alex Bennett just broke a rumor that the delay in reporting the news that Cheney shot an old man in the heart was due to an effort to hide or spin Cheney’s female companion.”

Not sure how you “break a rumor” but it’s certainly a juicy hypothesis.

RJ Eskow: “The real story is already emerging, if you’re willing to do a little digging. Cheney and Whittington went hunting with two women (not their wives), there was some drinking, and Whittington wound up shot. Armstrong didn’t see the incident but claimed she had, Cheney refused to be questioned by the Sheriff until the next morning, and a born-again evangelical physician has been downplaying Whittington’s injuries since they occurred. Neither the press nor law enforcement seems inclined to investigate.”

No doubt there will soon be the announcement of a high level terrorist threat to a major American city to get this off the front page.