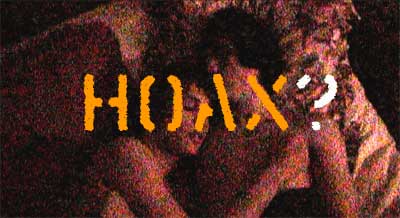 As news about Brandon Flyte’s expulsion over his film project Brokeback High spread across the internet at lightning speed, a larger problem developed for the student. His claims weren’t true.

He did create the film Brokeback High, and did receive high marks for it in his English class, and did show it to his marine biology class with the “snuggle scene” in it. He was punished for that, but not expelled.

However, now the teens claims of expulsion have thrown the school into chaos because of the resulting anger generated by Flyte’s false claims. The school has been faced with threats of arson and violence. The school superintendent Roger Woehl says he received 10,000 emails. Woehl: “He has disrupted the school. This is clearly a behavior we don’t find acceptable.”

On his website, Flyte appears proud of the coverage his story has received, even leading readers to the Oregonian, which today revealed the student’s hoax.

There are plenty of gay and lesbian kids across the country who suffer in oppressive and intolerant school situations. Whatever Flyte’s motives for fueling the hoax, he has made something of a joke of that reality. While it is good to know that there are thousands who will stand up and cry ‘foul’ when an incident like this occurs, it was the wrong thing for Flyte to do. The internet is a lightning rod for stories like this.

I was fooled, plenty of others were fooled too — MSNBC, CNN, the Advocate, (if you can trust Flyte!). I guess I understand now why my emails and calls to the school weren’t returned. “Wow, I appreciate your support,” he said, in an email to Towleroad. It seems that Flyte not only created the hoax, but perpetuated it as well.

High schooler in trouble for lie on Web site [oregonian]

UPDATE: Brandon Flyte has updated his site once again with a response to the Oregonian article. While someone has already published his response in the comments section of this site, I’ll print it again after the jump just for the record. With my attempts to contact the school going unanswered, it’s been very difficult to get to the bottom of this story. Brandon’s most recent comments after the jump…

It’s also unsurprising that after such a strong response, the school should try to use every tactic they have to eliminate that support, and the disruption it’s caused their school. While I can appreciate their stance in trying to get the school back to normal — and I do NOT agree with or condone the apparent threats of arson and violence that the school board says they received — I also do not appreciate their attempt to discredit me. An attempt which has clearly begun to work.

Let me be clear on something. I never expected this level of publicity. I posted this in a few places I thought it might be of interest, but, maybe foolishly, never expected more than a few dozen people to notice or care. The attempts of my opponents to paint me as an attention-monger are lies of their own. I never contacted most of these media outlets. The Oregonian, CNN, MSNBC, the Advocate, and others, all contacted me. My website initially started as a place to inform my friends at school and elsewhere what was happening with my situation. I never sought this out. I linked to them as a point of interest in how far the story was spreading, for those who were reading my site, nothing more.

If I only wanted publicity for my film, I would have posted the film in its entirety immediately. But I did not expect this kind of attention — in fact, I expected that those who viewed my site would already have seen the film. And I certainly would not have linked to the Oregonian if I had been aware of the underhanded tactics the administration planned to use against me.

To address Superintendent Woehl’s claims, why did he refuse to elaborate on my “series of misbehaviors”? Aside from my sketchy attendance — to which even the Oregonian recognizes I have already admitted — I have had no prior disciplinary actions taken on me. What misbehaviors is he talking about?

In addition, the superintendent claims that the class assignment forbade sex, nudity, or violence. Yet two boys in each other’s arms is not sex, bare chests are not nudity (or else the entire swim team should be suspended for indecent exposure), and my film did have some violence which I was not asked to remove. Likewise, several of the other films had violence in them that was allowed to stand.

I have seen PG-13 movies shown at my school, during classes with nothing else going on, that had more explicit sex scenes than what I showed. I saw a film made for the assignment with explicit drug use that was not asked to be removed. Why should I be disciplined for showing a film that violated no rule in the class I showed it?

Additionally, he claims that the transfer was not mandatory. Whether the rest is a misunderstanding or not, this is an absolute lie. I asked specifically when I was called into the office and informed of the transfer if I had a choice in the matter, and I was told that I did not. If I had, I would not have chosen to attend the Community College, as I wanted to spend the remainder of my senior year with my friends.

I have not been a model student throughout high school, but in the past year I’ve been trying to turn it around, and to have everything thrown away in the home stretch is disheartening and insulting.

As I said, I can understand Woehl’s desire to stem the disruption caused by the apparently thousands of unpleasant e-mails he’s received. And, now that he’s tried to brand me a liar, I know can’t convince anyone of my side if they want to believe him. I’m a kid with bad attendance and he’s an adult who runs a school district. People will believe him. The Oregonian clearly did, and many of the blogs that have been watching this story have started spreading that version of the story. But I hope that some people out there know a smear campaign when they see one.

I’m just a kid fighting a bunch of adults who are protecting their names by now trying to destroy mine. I plan to hold my head high and continue fighting for the truth. It seems I was premature in saying that my part of the fight had been resolved.”