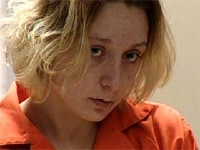 An investigation is underway in Kentucky after Jennifer Lynn Smith confessed to the killings of an gay couple who were murdered separately in their homes last week in Louisville, Kentucky. She told officials that she and her partner, Dale Moneypenny, stabbed Charles Poynter, 43, to death in his home and then she set the home ablaze with a lighter.

The couple then apparently drove to the home of Poynter’s partner, Blaine Thacker jr., 73, and murdered and robbed him. Smith said they told Thacker they needed a place to stay.

Moneypenny is still on the loose and police have not released any details of a motive in the case, but did say that the two couples were acquaintances. Moneypenny apparently has an extensive rap sheet that includes, burglary, assault, and auto theft. (Video)