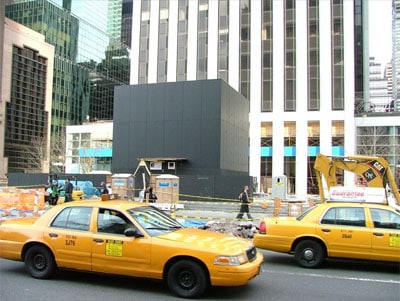 Behold the cube. Blogger ManyHighways has some shots of the new Apple Store opening in midtown Manhattan later this year. It’s Apple’s 30th Birthday this weekend and rumors are flying that something big is going to happen. Of course, it’s also April Fool’s Day so perhaps some of those big things may not be so big. Who knows. Rumors of an iPod phone coming anytime soon have been somewhat quashed this week, so our money’s on the long-rumored large-size video iPod very soon.

Forget gellin’! Adidas’ new shoe has a microchip embedded in the sole to sense changes in terrain and adjust cushioning accordingly.

FLASH: Cell phones are scary again. Researchers in Sweden say they have proven a correlation between brain tumors and heavy cell phone use. “The Swedish National Institute for Working Life said they looked at the mobile phone use of 905 people between the age of 20 and 80 who had been diagnosed with a malignant brain tumor and found a link. ‘A total 85 of these 905 cases were so-called high users of mobile phones, that is they began early to use mobile and, or wireless telephones and used them a lot,’ the study said. The study also shows that the rise in risk is noticeable for tumors on the side of the head where the phone was said to be used.” This latest study contradicts earlier studies that showed no correlation.

This week was the 10th anniversary of the Palm Pilot. 34 million Palm devices have been sold since its inception. 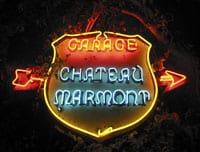 What hotels offer the best Wi-Fi options? Hotel chatter has drawn up a list that includes the Kimpton and Omni Hotel Groups, The Andre Balasz properties which include the Standard hotel chain and the Chateau Marmont in L.A. Jeff Klein’s Sunset Tower in L.A. and City Club in N.Y. also scored high, and for the budget conscious, they applaud Holiday Inn and Marriott Residence Inn.

They also drew up a list of the worst. They put the stinker on W Hotels, the Four Seasons, and the Marriot Flagship Hotels. How did these hotels get there? “Lack of consistency across brand, staffs, websites, and collateral materials that don’t give you the correct information, or the full story about a hotels WiFi capabilities, and poor reception.”

Each Friday, we’ll be doing a report on what caught our eye this week in the tech world. So send us your tips on hot new products, internet services, and gadgets. We’re also looking for someone obsessed with tech who may be interested in contributing (and writing) on an ongoing basis!