Anti-gay threats written in chalk were discovered on the campus of Michigan Tech University in Houghton last Friday. They were written in the middle of the night the same week that a slate of gay pride activities was scheduled at the University.

The threats involved the killing, mutilation, and shooting of gay people. The activities on campus at MTU last week included the wearing of “Gay, Fine By Me” T-shirts, meant to send a message of tolerance to students there. Obviously, some homophobe was threatened. If the message that anti-gay prejudice is real wasn’t getting across before, it surely has now.

Said Vice President of Student Affairs Les Cook: “This is probably the most pervasive incident we’ve had on campus since I’ve been here. We take these kinds of things serious and we are trying to provide our support. It’s an issue. It’s not healthy for our community and we’re hoping we can resolve things quickly.”

Authorities are still trying to find out the identity of the vandals. 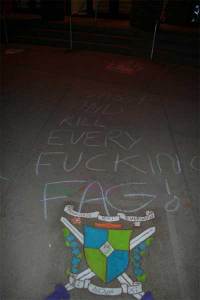 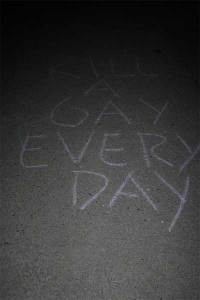