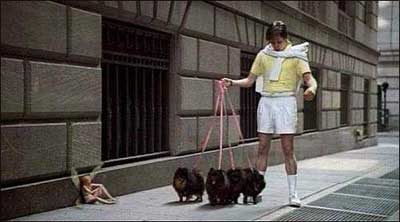 I’m curious as to how people feel about the controversy surrounding this Dodge ad. Some bloggers and gay ad watchdogs have called Dodge out for homophobia.

“It directly finds humor with the term fairy, referring not just to the type that flies around with a magic wand, but also the universally recognizable gay stereotype of an effeminate gay man,” said the Commercial Closet.

Said a spokesperson from Chrysler: “We were pretty surprised that there are individuals that are making the conclusion that sexual orientation can be determined by the type of clothes you wear and the type of dog that you’re walking. Are they suggesting that men that wear colored shirts are gay … or that all gay men dress alike? What we would ask someone to do is look at the ad for what it is. The ad is about the Dodge Caliber, which is a small car that stands apart from the competition because of its aggressive styling, styling that’s anything but cute — the tagline for the campaign.”

There’s some obvious validity to the claims of veiled homophobia, I think, but when you compare it to years and years of GLAAD lauding Will & Grace along with its flamboyant stereotype Jack Macfarlane, this looks like a pretty minor offense.

Is the New Ad for Dodge Caliber homophobic? [queer beacon]
Gay Group: Ad is Anything But cute [detroit news]
Too Tough [commercial closet]