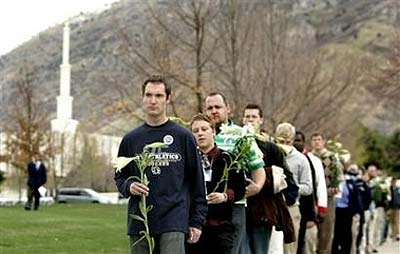 Carrying Easter lilies, a procession of 30 students and Soulforce members marched from a Mormon temple to the entrance of BYU. They carried 35 lilies, respresenting gay Mormon students who have committed suicide since 1965.

They were lead by openly gay BYU student Matt Kulisch: “I’m proud to say I’m gay. I’m proud to say I know beyond a shadow of a doubt that God loves me.” Once on campus, Kulisch got down on the ground and pretended he was dead.

He was then cited for “public expression” which is not allowed at the school.