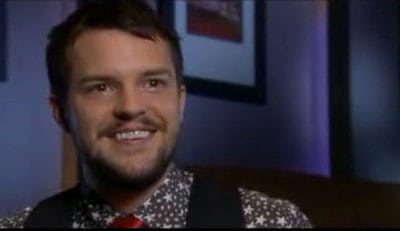 The Pet Shop Boys seem to be everywhere right now with their new album Fundamental. A documentary recently aired in the UK called Pet Shop Boys: A Life In Pop. Brandon Flowers of The Killers is interviewed (see clip below via Arjan) on the duo’s 20-year staying power.

“No matter how you look at America, if you just see a big hamburger, or whatever it is that you see, uh, [the Pet Shop Boys] took a bite out of it. America is still getting used to the word gay…so when you’ve got a band that’s seen as this gay…thing…it’s instantly going to be, there’s going to be a wall that’s gonna get put up. I think that the song for me that stood out, probably that meant something to me was “Being Boring”, and I just assumed that it meant a lot to everybody. The first song that I danced to on a dancefloor in a disco was “New York City Boy”. This was at a hip club in Las Vegas.

An eclectic selection of free tunes:

Mocky and Feist: Fighting Away the Tears [all things feist]