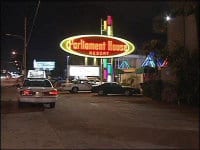 The police are not treating either incident as a hate crime. While the victims were left scared, according local news station WFTW, at least one of them, who had just won a trophy at the Orlando Fringe Festival Awards, was left with his sense of humor intact.

Chad Cronon: “I was able to use this ‘Fabby Award’ as a fabulous weapon to defend myself against this attack. When I did that, that’s when the hammer came out, and I got popped in the back of my head. And as soon as I got hit in the head, Matthew got hit in the ribs and in nose, and we finally got away.”

Who needs lipstick lesbian crimefighters when one has a Fabby Award?

In all seriousness, be extra aware if you’re planning a visit to the Parliament House anytime soon.

Previous Post: « Vernon Robinson is Back with Another Ugly Ad
Next Post: Tuned In: Brandon Flowers, Pet Shop Boys, More… »