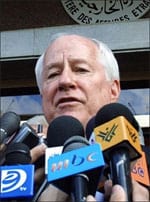 According to ABC’s source, Kolbe was “one of a small number of ‘problem members’ of Congress (along with Foley) whom page program supervisors complained spent too much time socializing with pages, taking them to dinner or sporting events outside of official duties.”

Kolbe was questioned about those allegations and also reports that he acted inappropriately toward two former pages during a 1996 camping trip. Said Kolbe:

“I know there are a number of inquiries underway, and we’re cooperating fully with all those inquiries, and I’m sure at the end of the time it will show that we acted appropriately and did exactly the right thing.”

Previous Post: « Towleroad Guide to the Tube #48
Next Post: Fried Coke Balls: And We Wonder Why America Has Obesity Issues? »