Crooks & Liars has a wrap-up from Keith Olbermann on Bush’s latest shameful signature, the Military Commissions Act of 2006: 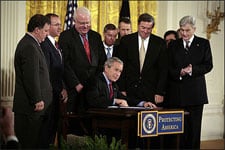 “Today, 135 years to the day after the last American President (Ulysses S. Grant) suspended habeas corpus, President Bush signed into law the Military Commissions Act of 2006. At its worst, the legislation allows President Bush or Donald Rumsfeld to declare anyone — US citizen or not — an enemy combatant, lock them up and throw away the key without a chance to prove their innocence in a court of law. In other words, every thing the Founding Fathers fought the British empire to free themselves of was reversed and nullified with the stroke of a pen, all under the guise of the War on Terror.”

Jonathan Turley, Professor of Constitutional Laws at George Washington University, lays it all out: “The Congress just gave the President despotic powers and you could hear the yawn across the country as people turned to Dancing With the Stars.”

Bush: “One of the most important pieces of legislation in the war on terror.”
ACLU: “One of the worst civil liberties measures ever enacted in American history.”

(via virtual matter, video via wonkette)