In an unusual move for an organization with no openly gay athletes, the National Hockey League and the Toronto Maple Leafs have allowed filmmakers to use their logos and uniforms in a new film about a gay couple who become guardians of a boy questioning his own sexuality: 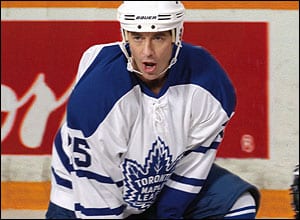 “Actor Tom Cavanaugh plays a gay ex-Leaf in a comedy film Breakfast With Scot currently being shot in the GTA and Hamilton. He’s one-half of a homosexual couple — his partner is the team lawyer — whose lives are turned upside down after becoming guardians of Scot, ‘a budding queen of an 11-year-old boy,’ according to the storyline.”

Said Cavanaugh, who is Canadian and best known for his work on the TV series Ed: “I never in a million years thought when we finally went to shooting we’d be donning Leaf sweaters. I thought it’d be that thing where it’s the Toronto Razorbacks or whatever. There’s something instant to the viewer when you put on a Leafs jersey or any Original Six jersey. It’s harder to tell the story asking the public to remember this is supposed to be the NHL, even though we have to call it the NHA. You have to give full credit to the NHL and the Leafs for signing on. It also shows the possibility for if someone were to come out, perhaps it wouldn’t be as big a deal as we think.”

Past and current Maple Leaf captains were supportive of the film. Said former player Darryl Sittler: “Obviously, it’s the real world we live in and I have no issues with it at all. To me, those things have come a long way and they should.”

Would this have played out this way if it were taking place in America? I doubt it.