Monday I reported on an incident that occurred at an anti-gay marriage rally put together by the group Catholic Citizenship in which the group’s executive director Larry Cirignano allegedly shoved a woman who was there to counter-protest. The woman, Sarah Loy, was pushed so hard the back of her head slammed against the ground. 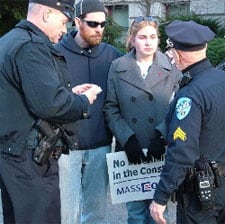 The Massachusetts gay rights group MassEquality has called on the group to remove Cirignano and police have filed a misdemeanor assault and battery complaint against him.

Cirignano remains defiant: “I did not push anyone to the ground. I had a portfolio in one hand and escorted the lady back into the crowd and left. I never touched her shoulders and she apparently thought that she could draw a foul like it was a basketball game by falling down. Great theater, not Academy Award material. She was not in the crowd, she was out in front of the crowd facing them with her sign raised in the air blocking their view of the speakers. I was not debating her, just getting her out from in front of the podium.”

Witness Chris Robarge told Edge Boston he saw something else: “There was a hand on each of her shoulders and then she fell. The back of her head hit the ground. I did not see the face connected to the hands…As a straight man working very hard to make sure that same-sex marriage rights are not put in jeopardy here in Massachusetts, this [alleged] assault was beyond disgusting to me.”