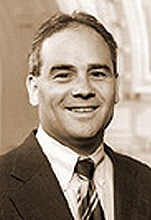 New Jersey Assemblyman Democrat Reed Gusciora told New Jersey Network news show “On the Record” on Sunday that he is gay. The lawmaker said he has never denied he was gay, but decided to do so, according to the Star-Ledger because “his sponsorship of the marriage equality bill seemed to raise the question in the minds of others.”

Gusciora is pushing for same-sex marriage in that state and apparently didn’t want speculation about his sexual orientation to be a distraction. Said Gusciora: “I’ve just never made an issue of it. If someone asks me, I tell them. No one ever asked me publicly before.”

Gusciora’s proposal is, according to the Ledger, “to create government-sanctioned ‘civil marriage’ for everyone. The measure also protects religious institutions from being forced to perform or recognize the unions. He said the idea, which mimics the laws in several European nations, is a step beyond civil unions, which recognize the rights of same-sex couples without calling it marriage.”

Steven Goldstein of Garden State Equality said Gusciora’s coming out has significance because he can now bring a personal perspective to the battle: “‘Reed’s coming out has enormous historical and policy consequences.’ Gay rights advocates in states such as California and New York have had more success in the legislative process, Goldstein said, because of the personal impact openly gay lawmakers can have on the views of their colleagues.”

The general agreement is that Gusciora’s sexuality will be “a non-issue.” Added Gusciora: “At least I hope so. New Jersey is a lot more tolerant than other states.”

Activists will kick off a 10-day campaign today to try and convince lawmakers that marriage, and not civil unions, is the way to go. Goldstein told the Star-Ledger in a separate report: “There is a sense of anger in the gay community that we’re being excluded, that our relationships are somehow less. We want full marriage equality.”