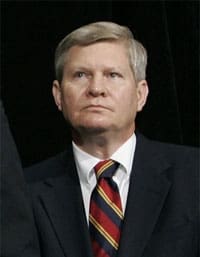 “Johnson, 59, was out of surgery at 12:30 a.m. Thursday, a source close to the senator told CNN. He was hospitalized Wednesday morning after he appeared to suffer stroke-like symptoms.

Adm. John Eisold, attending physician of the U.S. Capitol, told CNN that Johnson had ‘an intracerebral bleed caused by a congenital arteriovenous malformation. He underwent successful surgery to evacuate the blood and stabilize the malformation.’

‘It is premature to determine whether further surgery will be required or to assess any long term prognosis,’ Eisold said.”

If Johnson were unable to serve the rest of his term, South Dakota’s Republican Governor Mike Rounds would nominate his replacement which would shift the balance of power in the Senate, giving parties a 50-50 split. The GOP would then retain control with Dick Cheney’s tie-breaking vote.