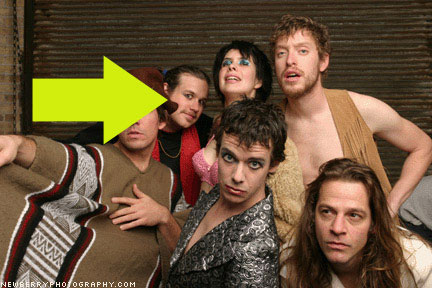 Blog Good As You may have uncovered the man behind the “ex-gay” ‘The Bible Says’ video. One of the bands listed on the LoveGodsWay.org site as a “gay band” is Bobby Conn. Their website features the above photo of a band called The Glass Gypsies, featuring a man who looks very much like Donnie Davies.

Dan Savage at Slog did some further investigation and discovered that blog Newspeak found a review revealing the Glass Gypsies to be a band that does political satire. Savage also discovered some suspicious videos.

I think those that voted “The Bible Says” video an elaborate ruse may have something.