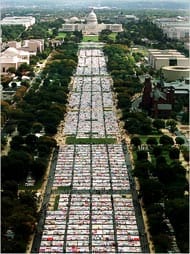 Creator of the AIDS quilt in legal tug-of-war with its caretaker, the Names Project: “The dispute is not just about the relatively small swatch of the quilt, or even the simmering personality clash between Mr. Jones, a founder of the group, and his successors. More broadly, the battle reflects the changing symbolism and purpose of one of the most recognizable symbols of the AIDS crisis as the crisis itself has changed.”

Housing study in Michigan finds “discrimination is a daily challenge” to gay people looking to rent and buy property in that state: “For instance, a gay couple was quoted a higher rent at an Ypsilanti apartment than the corresponding straight couple. In Battle Creek, a lesbian couple was shown one apartment; the straight couple was shown two and offered $200 off the first month rent as an incentive. However, discrimination was far lower in Metro Detroit, where just three of the 36 tests revealed discrimination.”

Some New Jersey parents are pissed that their children are being shown “That’s a Family”, a video that depicts a diverse set of examples of modern families, including those with same-sex parents. Superintendent: “‘”Marriage isn’t really even discussed. I don’t think the words are used anywhere in the video. It’s just kids talking about the family they live in, that they go home to each day, and what they do in their family.’ She says the video is part of a state-mandated course about diversity, tolerance, and bullying.”