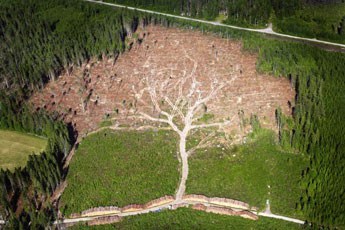 This is one of the more remarkable photos I’ve seen in some time.

What you’re looking at are roads and cleared land caused by loggers and their trucks and machinery in southern Sweden. The pattern they’ve caused in the destruction has come to illustrate the very thing they have destroyed.

It was an entry in a photo contest about “convergence” on Timothy McSweeney’s Internet Tendency, an offshoot of the well-known literary quarterly.

According to McSweeney’s: “It was taken by a Swede named Jocke Berglund, and it won him a Wildlife Photographer of the Year award from London’s Natural History Museum.”

The Earth made us take a second look at what we have taken away from it.