A disgusting story out of Detroit — a 72-year-old man pursued and beaten in a sick attack that appears to have been motivated by the man’s perceived sexual orientation. 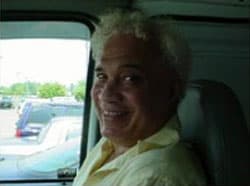 “The victim, Andrew Anthos (right), was riding a city bus back to his residence at Detroit’s Windsor Tower apartments on Feb. 13 when another male passenger asked him if he was gay, Anthos’s niece, Athena Fedenis said. Anthos was followed by the man from the bus and beaten with a pipe in front of his apartment, Fedenis said.”

Due to the repeated beating, Anthos is now paralyzed from the neck down and cannot speak above a whisper.

Said the victim’s aunt: “It just doesn’t make any sense. Why do people have to hurt each other?”

This is what you get in America for being perceived as gay.

Detroit police are investigating the attack and asking for anyone with information to come forward. Unfortunately, sexual orientation is not covered under Michigan’s hate crime statutes.