A popular British pub is being pressured to drop Barrymore Pie from their menu, or at least the description, which is described as “FA**OTS – LOCALLY MADE! Swimming in onion gravy served with mushy peas and mash.” 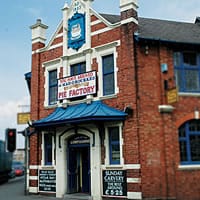 A customer alerted British news outlets after being offended by the menu item, prompting a statement from gay rights activist Peter Tatchell, of Outrage! Said Tatchell: “This may have been intended as a joke but homophobia is not a subject of fun in the same way racism is not appropriate for a joke.”

The owner of the pub, Mad Rourke’s Pie Company, disagrees. Said owner Peter Towler: “It’s been on the menu six years during which time I have had hundreds of thousands of customers and not a single complaint. Why don’t these people worry about something important — like the National Health Service. These people say this is not funny but their behaviour is turning it into a joke. I am sorry that they are upset but I will not be bullied. I will not bow to this pressure. I sell about 100 Barrymore Pies a week. I suppose I could change its name to Politically Correct Pie.”

According to The Sun, “Fa**ots are a traditional meatball dish particularly popular in the West Midlands.”

Pies and prejudice anyone? [the sun]