British bachelor gets dream date with Anderson Cooper — for $21,000. 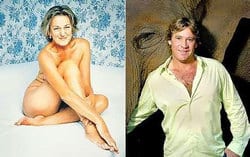 In ironic hanging, Steve Irwin portrait replaces Germaine Greer’s at Australia’s National Portrait Gallery. At the time of Irwin’s death, Greer had slammed the animal lover, saying “The animal world has finally taken its revenge on Irwin, but probably not before a whole generation of kids in shorts seven sizes too small has learned to shout in the ears of animals with hearing 10 times more acute than theirs, determined to become millionaire animal-loving zoo-owners in their turn.”

Britney Spears’ rat nest goes up for sale for a cool million. But she wastes no time replacing it.

Scientists: May be too late to save polar ice caps.

The Guardian reflects on gay “dating” site Gaydar and its founder Gary Frisch, who plunged eight floors to his death from his apartment balcony in south London last week: “”Some people are uncomfortable with Gaydar because it encourages a culture, almost through peer pressure, which kind of obliges users to reference themselves by their sexual preferences and the size of their equipment. You won’t generally find that someone will call themselves, say, librarian3. It’s going to be cocklover72 or something. You feel obliged to be that way because it’s part of the culture. If you were to step outside that culture you would just look odd.”

Gay Jamaican who appeared on TV anonymously has attempted suicide after residents in his community recognized his pendant and IDed him.

Damien Hirst offers up butterflies to Hollywood: “Indicative of how important his attack on Hollywood is for him, Hirst is flying more than 100 members of his staff into LA for the event and the Oscar parties. His first Hollywood show is not just about those tired old warhorses, money and celebrity. It’s also about credibility.” 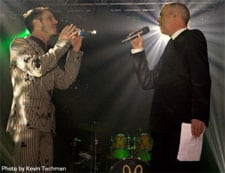 Shame: How the Bush administration honor’s America’s troops: “Behind the door of Army Spec. Jeremy Duncan’s room, part of the wall is torn and hangs in the air, weighted down with black mold. When the wounded combat engineer stands in his shower and looks up, he can see the bathtub on the floor above through a rotted hole. The entire building, constructed between the world wars, often smells like greasy carry-out. Signs of neglect are everywhere: mouse droppings, belly-up cockroaches, stained carpets, cheap mattresses.”