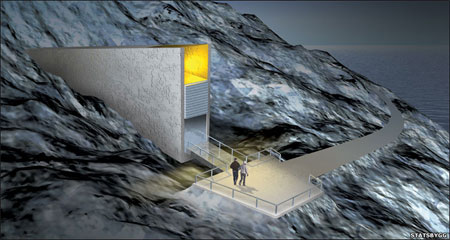 This fascinates me in a James Bond-ian, “Day After Tomorrow” kind of way, although the prospects of having to use it are terrifying.

The Norwegian government has unveiled plans for a “seed vault” that would house samples from all known varieties of agriculture from around the world, protecting them from “future catastrophes, such as nuclear war, asteroid strikes and climate change” in a frozen, arctic mountain bunker on a remote island in the Barents Sea between Russian and Norway.

The Global Crop Diversity Trust, engineering the project, have taken all things into consideration. Said its director Cary Fowler: “We looked very far into the future. We looked at radiation levels inside the mountain, and we looked at the area’s geological structure. We also modelled climate change in a drastic form 200 years into future, which included the melting of ice sheets at the North and South Poles, and Greenland, to make sure that this site was above the resulting water level.”

The seed samples will be stored at 0 Fahrenheit, a temperature at which some (sunflowers) will last longer than others (peas).

The facility will not be manned. Added Fowler: “Somebody will go up there once every year to physically check inside to see that everything is OK, but there will be no full-time staff. If you design a facility to be used in worst-case scenarios, then you cannot actually have too much dependency on human beings.”

What we need now is a cryogenic chamber to store the world’s DNA.