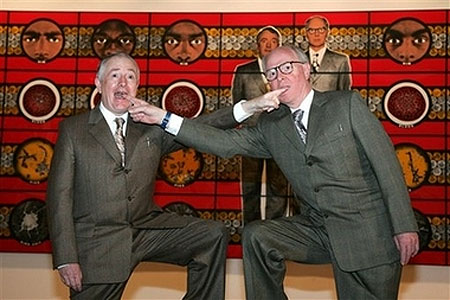 Gilbert and George give each other the finger as the Tate Modern opens the largest exhibit it has ever devoted to a single artist.

The Guardian reflects on their “deeply filthy” exhibit and career: “Gilbert & George have drawn cartoon hand-jobs, photographed skinheads, Asian boys, mouths, navels, bums, leaves, tears, words and expressions. Their multi-panelled pictures burst into acid colour and became ever more lurid and confrontational. In some ways, their art prefigured punk, saw fundamentalism coming and foresaw the shocks of Aids. And the mood in their art kept flipping, from celebration to horror, from flowers to shit. In Shitty Naked Human World, Gilbert & George got down to their underpants – two middle-aged naked men ungainly in their skins, George never taking his glasses off, their turds like sentinels behind them.”

Previous Post: « Kathy Griffin on the “N” and “F” Words
Next Post: James May, Co-Host of Britain’s Top Gear, Outed? »