Kathy Griffin, never one to hold back herself, holds comedians to different standards than TV actors when it comes to offensive language. In an interview with AfterElton she speaks out about the Isaiah Washington incident: 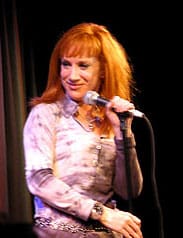 “I think it’s hilarious that you can go to rehab for saying the F-word. I mean, what is it? A bunch of queens screaming at him? Saying, ‘Oh, girl, no you didn’t!’ I just think that is funny. I mean, I think it is a good thing. You can’t be calling someone a fag at work and stuff. Unless you’re gay — in that case, have at it…I’ve only heard that Melissa Etheridge’s wife [Tammy Lynn Michaels] sort of defended [him]. And, by the way, I read that in The Enquirer, so it’s true! I guess she and Melissa are friends with him. I guess they’ve had him over for dinner with his kids or something, and she was like, ‘Well, he never used that word around me.’ I was like, ‘Well, yeah, he’s not gonna use it around you.’ I will tell you this: I think when you’re a serious actor on a big show like that [Grey’s Anatomy], I think you do have to watch what you say. I think you will offend people and hurt people.”

Griffin thinks comedians have the right to use the “N” and “F” words, and the audience will reach a verdict on whether or not it’s appropriate:

“Michael Richards did a really stupid thing when he lost his s— on stage screaming the N-word. It was a bad call, and it wasn’t funny. He lost it. I don’t know if he was just crazy or trying to be funny or racist or everything combined. [But] we do have the right to say those things. And audience members have the right to say, ‘Buh-bye.’ Or they have the right to go, ‘This is OK.'”