John Waters talks to the Provincetown Banner about a new CD he has produced that is set to arrive on Valentine’s Day. It’s described by the paper as “a combination of the teen angst music of the ’60s along with lounge-y love ballads, rhythm and blues and a liberal sprinkling of cuts that defy categorization. It is both eclectic and electric on a lot of levels with everything from Dean Martin and Ray Charles to Ike and Tina Turner blended with punk rock and movie themes.” The CD contains 14 of the director’s favorite tracks 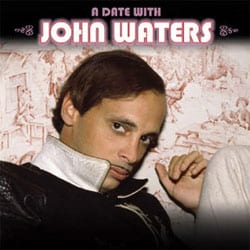 Waters says as a teenager he fantasized about being a DJ from his Baltimore bedroom: “I had a top 10 board over my bed and once a week or so I would call the record stores in Baltimore and pretend I was the radio station and ask them what sold the most and average them out and put the top 10 up with a blank piece of cardboard over each title, pull off the cardboard and say, ‘Number 10 is…’ and name the record and dance around the room. I was really obsessed by it.”

Waters notes that one of the songs on the CD has an intimate Provincetown connection: “Every summer I ask, why are there no mixed bars, half gay half straight [in Provincetown]. I’m most comfortable with that. I like it when you don’t know what everybody is. Provincetown used to have that. I remember every summer, in the beginning, would be the Back Room [formerly part of The Crown & Anchor] and the A-House. One would be straight and one would be gay. You didn’t know, it just happened that first night. For a while the Back Room had a club once a week which [Waters’ movie regulars] Cookie Mueller and Sharon Nesp were the hosts of. It was kind of a punk rock gay club or mixed club which was unheard of at the time. ‘Jet Boy Jet Girl’ was played over and over. It’s the only song that got me a warning on the CD. I mean compared to ‘Johnny Are You Queer.’ This one says, I’m gonna penetrate, make you a girl . There aren’t very many gay punk rock songs — this may be the only one.”