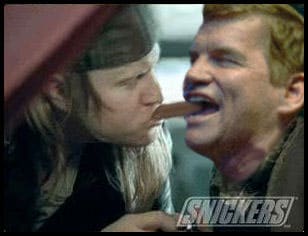 We hear that Ted Haggard is rather upset they pulled the Snickers commercial: “I really enjoyed doing the Snickers commercial. There is a sense of camaraderie, I suppose, that develops between actors in that kind of situation. There were a lot of takes, and a lot of candy bars in order to get the scene just right. It’s a scientific fact that chocolate has chemical compounds that are similar to methamphetamine and stimulate sexual feelings, so it was a little tough on me. I’m just really disappointed with the American public that there is such intolerance for heterosexual feelings.”

Meanwhile, in actual news, gay escort Mike Jones reacted to Haggard’s announcement that he’s “completely heterosexual” on MSNBC yesterday. Said Jones: “That’s the quickest therapy I’ve ever heard of. Y’know, it’s hard for me to imagine someone who is performing oral sex and saying that he’s straight. That just doesn’t jive.”

And blogger Manhattan Offender recently did an interview with NYC nightlife promoter Daniel Nardicio. Nardicio tips him off to a podcast he did with Mike Jones, in which he goes into “the homophobe minister’s drug use, sexual positions, and, um, cleanliness.”