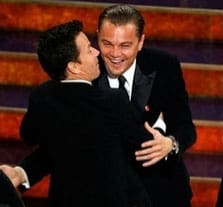 In a recent interview, Mark Wahlberg said that he and Joaquin Phoenix were both considered for roles in Brokeback Mountain but that certain aspects of the story (the gay ones, for example) made him uncomfortable:

“I met with Ang Lee on that movie, I read 15 pages of the script and got a little creeped out. It was very graphic, descriptive – the spitting on the hand, getting ready to do the thing. I told Ang Lee, ‘I like you, you’re a talented guy, if you want to talk about it more…’ Thankfully, he didn’t. I didn’t rush to see Brokeback, it’s just not my deal… Obviously, it was done in taste – look how it was received.”

Maybe Wahlberg should have taken some notes from his gay uncle, about whom he once said: “My uncle was gay and he was a teamster and a truck driver and he was a guy’s guy, but he kept this secret his whole life. Imagine how hard that must have been for him. I feel so bad. Every time my dad brings it up, he cries because he loves his brother more than anything. He doesn’t care what it was. He was born that way. Acceptance is the key. The only way you’re gonna succeed in life and really grow as a human being is through acceptance.”

And you know, there are only so many tough Boston cop parts out there.