It’s fascinating when something like this turns up, in this case because we’ve all seen the Zapruder footage so many times. The discovery of this new footage, filmed by George Jefferies moments before the president was shot and killed, presents at least one new piece of evidence that might shed light on theories behind the assassination: 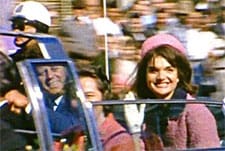 “It…briefly shows the US president’s coat bunched up on his back – a detail that will be scrutinised by conspiracy theorists who see evidence of a plot in, among other things, the fact the bullet wounds on Kennedy’s jacket and body did not appear to match…The film was taken less than 90 seconds before the fatal shots were fired. ‘It’s interesting for the conspiracy researchers to study Kennedy’s coat, which appears to be bunched up on his back,’ [Sixth Floor Museum curator Gary] Mack said. Since Kennedy’s jacket was riding high on his back, the entry wound in his body did not match the expected position in his coat – grist for the conspiracy mill that claims more than three shots were fired, he said.”

If the Kennedy assassination had happened today, given the prevalence of cell phones and video cameras, no doubt there would have been hundreds of pieces of documentary evidence.