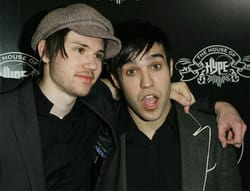 “I tend to be a bit prudish. I’m a make-out king–I’ll kiss anybody–but as far as going further than that, I wanna keep my number down. I don’t wanna tell my future wife, ‘Yeah, I’ve been with, like, 50 people.’ But when I’m with somebody, the caveman in me wants it to be completely deviant. Like, “Oh this isn’t supposed to go in there? Then that’s where it has to go…I have [kissed boys]. Anybody above the waist is fair game.”