Controversy is brewing around an American Idol contestant who Deadline Hollywood‘s Nikki Finke says will be the first openly gay contestant on the show if he makes it into the top 24, to be announced Wednesday night.

He also attended Harvard, according to Finke: “At Harvard, he became something of a campus legend, first competing for the title of Mr. Harvard in which contestants were ‘parading in bathing suits, shaking scantily-clad behinds to the tunes of Britney Spears, and performing a racy striptease,’ described the Harvard Crimson student newspaper. Then, ‘in his subdued mohawk and slight trace of black eyeliner’, he was a wannabe rock-star in the campus band ‘Tommy and the Tigers,’ according to the paper, which noted that Lowe’s costume choices included a pink lounge suit. In a 2005 interview with the Crimson, Lowe appears to out himself. ‘Harvard allows me to dress however I want, wear my hair however I want, sleep with whomever I want,” he said.’

The other rumbling is that this Brit, who is a former back-up singer for Take That and was in his own boyband called North and South, a children’s TV show called “No Sweat”, acted in plays in London’s West End, and starred in some Massachusetts Tourism videos, may have been courted at BMG when Simon Cowell worked there. Some smell a plant.

Lowe’s audition, which took place in Seattle, was aired in the UK version of AI but not in the U.S. We’ll see if he makes it on to the next round tonight, though Finke says that reports are circulating that he didn’t. Next career move? 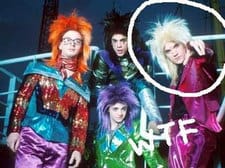 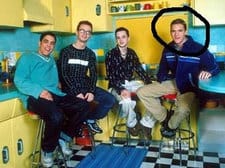 And if anyone can find the nearly nude photo of Lowe from said “trendy British magazine”, please send it in.