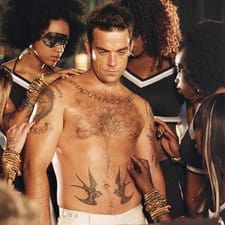 Robbie Williams has entered a treatment center in the U.S. because of an addiction to prescription drugs, his representative said today, adding “There will be no further comment on this matter.”

Williams has talked in the past about a reliance on anti-depressants and other substances. According to the Daily Mail the singer talked to Stephen Fry about his addictions in a documentary about bipolar disorder last year: “My first drug of choice was probably fantasy. Fantasising about being an actor or being a singer, going to the moon, whatever. And I don’t know if that was to escape a depression. I was sad that my career went like that (pointing upwards) and my self-esteem went like that (pointing downwards). With me, how my depression manifested itself was that I’d stop going out. I lost the cog to socialise. Having said that, I’d get up in front of 40,000 people and say ‘look at me, I’m ace’. And then as soon as I got off stage, I’d get in the tour coach and go back to my bedroom and pull the duvet over my eyes. Cocaine gave me a twitch, and drink just made me ill. So all the props I had just had to be removed.”