The reaction to the cold-blooded hate killing of Detroit gay senior Andrew Anthos has been pathetic at best: 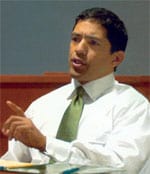 “It has been 16 days since someone killed Andrew Anthos, a 72-year-old openly gay man, by beating him with a pipe. Before and after the beating, the killer shouted anti-gay slurs. In 16 days, only one person with any sort of a well-known name in southeast Michigan has stepped forward to say it is wrong to beat a 72-year-old man to death with a pipe because he is gay.”

Sen. Hansen Clarke (D-Detroit, pictured) has been the only public official to come forward. He said: “It’s so sad and tragic. I can see why an elected official may not want to be involved.”

Columnist Bill McGraw asks: “Is the high-level silence here because Anthos was gay, or is it because everyone has grown immune to metro Detroit’s never-ending mayhem? Last week, a 13-year-old and 11-year-old were shot and killed, execution-style, in a Detroit dope house. Public officials mostly have remained silent on that outrage, too.”